Earlier this month I attended the Pennsylvania Dairy Summit in Lancaster, Pa. The event is hosted annually by the center and the Professional Dairy Managers of Pennsylvania, and it draws a mix of producers, farm employees and industry professionals. Despite the frustrations in the industry right now, people come to the Summit looking for positive reinforcement and insight on ways to strengthen their businesses. 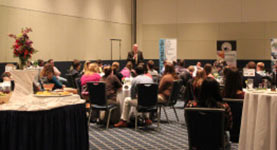 This year’s Dairy Summit theme was “Following Your Compass,” and many of the discussions centered on ways to be more intentional and focused on the farm and in the industry. At the end of the Summit, I had the opportunity to close with some of the key points I heard during the event. Here is some of the advice shared during the two-day event.

Next year’s Dairy Summit is planned for February 5 and 6 at the Penn Stater in State College, Pa. If you haven’t attended the Dairy Summit before, I would encourage you to consider attending next year’s event. We all know how challenging it is in the industry right now and how easy it is to focus on the negative. The Summit provides an opportunity to redirect your focus on the opportunities that exist and on the things that are within your control to change.

Editor’s Note: This column is written by Jayne Sebright, executive director for the Center for Dairy Excellence, and published monthly in the Lancaster Farming Dairy Reporter