Spring came quickly this year, with the weather warming up in late February and temperatures now topping 60 degrees or higher daily. We don’t know if this trend toward warmer weather means that spring officially arrived early or if it’s just an early taste before more cold weather. For most of us, the transition from the cold winter months to the fresh, warmer weather of spring is a change we are eager to embrace.

Other changes are not as easy to embrace. Those of us in the dairy industry have had to deal with dramatic changes over the past several years. With milk prices averaging at or below breakeven on many Pennsylvania dairy farms, we have had to rethink how we operate our businesses and what it takes to succeed in this industry. For some, it may mean adding another enterprise like a poultry barn or an agritourism component to the business. Others have invested in value-added enterprises to move their product closer to the market.

Some farms have retooled every area of their business to maximize their efficiency. They’ve found ways to make sure every measure is taken to ensure optimal cow comfort and herd health while overcrowding and increasing milk production per cow to make the most of their current facilities.

Change is inevitable, but it is never easy. No matter what the change is, it requires detailed thought and careful planning, as well as a willingness to move from “what we’ve always known” to something new, different and uncertain. 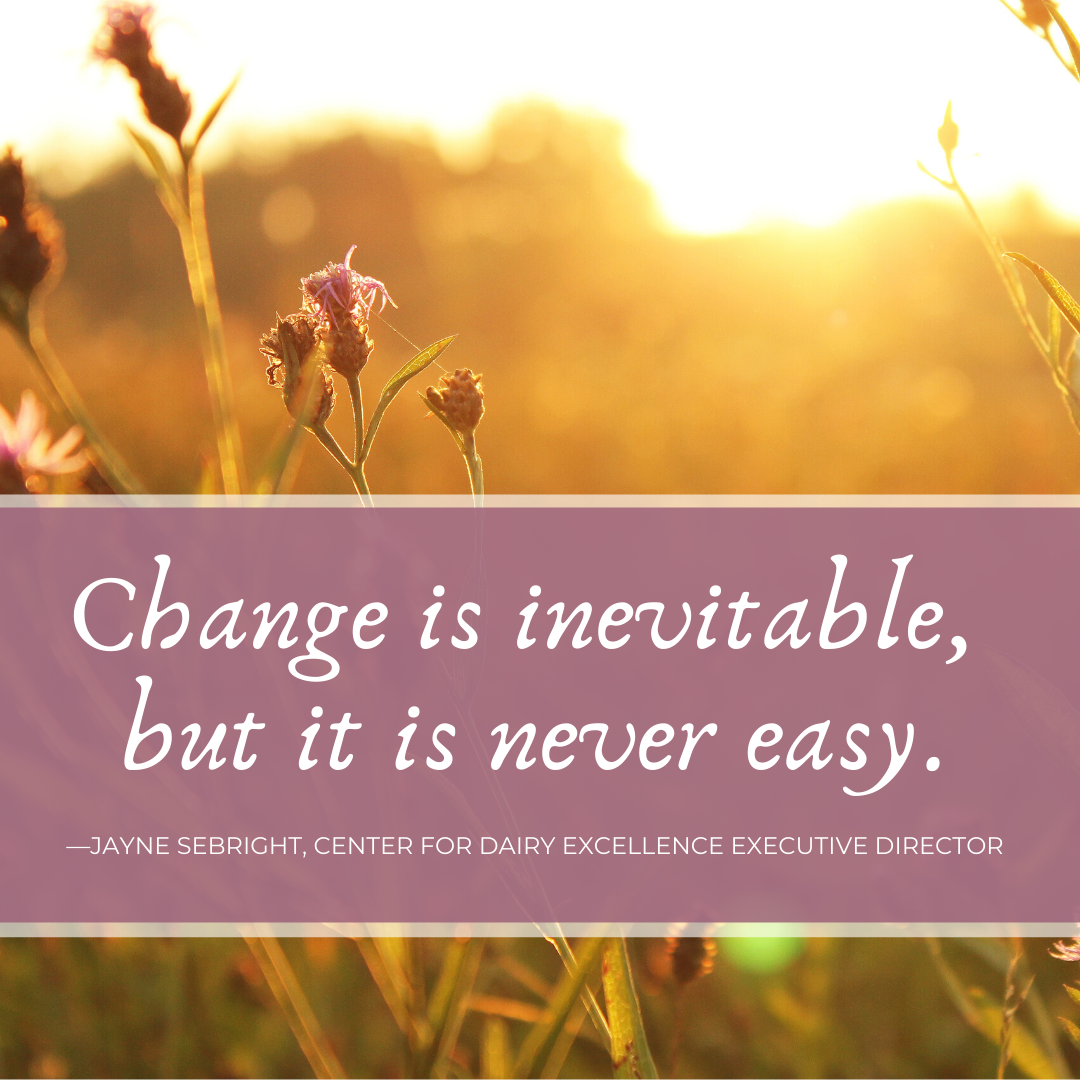 Of Mice and Men

Years ago, one of my mentors challenged me to read “Who Moved My Cheese?,” written by Spencer Johnson, M.D. The book symbolizes four common reactions to change through his story about four characters – two mice and two “little men” — who are forced to move in search of new cheese after their old cheese disappears.

The mice, aptly named “Sniff” and “Scurry,” noticed the cheese dwindling and were mentally prepared to search for the new cheese. They accepted the change and the challenge eagerly, while the two little people, named “Hem” and “Haw,” were in denial. Instead of accepting the change and searching for new cheese, they wasted time being angry over the unfairness of the situation and blamed each other for their plight.

Lessons that the four characters learned in the book included:

The maze where the four characters lived represented life, and the cheese represented our search for happiness and success. A couple of years after reading the book, the company where I worked went through a downsizing and the communications team I was on found ourselves without jobs. I saw the scenario described in the book play out that summer. Two of us accepted the change and quickly began looking for other opportunities, while the other spent the summer complaining about how unfair the company had been in the decision.

That change, however, led me to a job at the Center for Dairy Excellence. It was probably the best thing that ever happened in my career because it opened a new opportunity where I felt like I could have a significant impact on the industry.  Fourteen years later, I am in a role where I can create resources to help farm families, build collaboration to strengthen the industry, influence policies on behalf of the industry, and educate key policy leaders and others about how important dairy is to our Commonwealth.  It is work that I am very passionate about and something I would have never been able to do in the job I had years ago.

This year, the Center’s Dairy Professional and Dairy Producer Roundtable Meetings will focus on managing change to stay successful in an ever-changing dairy industry. The presentation and discussion will be based on consulting and coaching from Dr. King Hickman, DVM, who is a founding member of GPS Dairy Consulting, LLC, from Lakeview, MN. Dr. Hickman and his team have a coaching mindset. Their mentality fosters a culture of collaboration and empowers teams to achieve management or business success. Dr. Hickman has been working with us to share tools to help both industry professionals and producers adapt quickly and successfully in today’s changing dairy climate.

This year, due to the COVID-19 situation, both our Dairy Professional and Dairy Producer Roundtables will be held in the fall. Look for dates to be announced later this spring. All the roundtables include a meal and are free to attend.