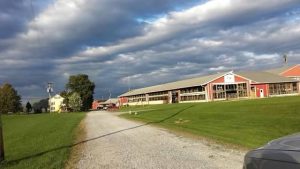 In the Center for Dairy Excellence’s latest episode of the “Cow-Side Conversations” podcast, Dale Brown, a partner at Jobo Holstein Farm in Gettysburg, Pennsylvania, shared how overcrowding has improved their profitability and overall breakeven costs. While some worry that overcrowding could hinder individual cow performance, Dale offered suggestions for making it work based on their firsthand experience and lessons learned over the years. He also discussed the benefits their team has found in working with outside consultants and participating in benchmarking groups to continually evaluate their dairy operation’s costs.

Dale opened the podcast by describing the history of Jobo Holstein’s family business, which includes multiple family members as partners: John J. Hess, Bonnie Hess, John Hess, Josie Riser, Joy Widerman and Dale himself. The family currently has about 1,050 cows and ships approximately 90,000 pounds of milk per day. They farm 910 acres and double crop rye grass and conventional corn silage. Dale first became involved at Jobo in 1992 when he married his wife, Jennie, and now helps manage the dairy’s operations – including the milking and barn labor for mature cows, nutrition, maintenance of the milk handling equipment, and more.

In 2000, the family formed the LLC entity that is still in place today. At that time, they were milking 500 cows. In 2007, they built another 500-cow free stall barn and milked about 900 cows. In 2017, they made the decision to start milking an additional 100-150 cows. Now, in 2022, their overall herd is 16% overcrowded in six-row barns. During the podcast interview, Dale described how they navigated diverging opinions on the practice of overcrowding and made the decision to move forward with it.

“We were struggling with profitability for many years, and it just wasn’t cash flowing. So, in 2017, we did a lot of work to cut our feed costs and started milking more cows,” he shared in the podcast. “It was something we started doing out of necessity. Today we under-crowd our fresh cows to about 80 to 90% stocking density, so that makes us have some groups that are 20 to 25% overcrowded.”

Over time, overcrowding has had a positive effect on their profitability and breakeven costs. While they had initial reservations, Dale shared how they persisted and challenged their own thought processes.

“When I was more involved with the cow-side management, I would have told you that when we got over 930 cows, we started having injuries. But if you ignore that and just push through it, the injuries will disappear. Whatever your glass ceiling is, it’s probably imaginary,” he said. “In the same stalls that I thought 930 cows was too much, we’re now milking about 1,050 cows. Just a few costs increased, including feed per cow and utilities to cool the milk. Our labor did not increase, and all our other costs are the same. We have been profitable ever since [we started doing this] in 2017.”

In addition to overall profitability, their individual milk yield has also improved since they started overcrowding. In 2017, they achieved 75 pounds out the door per cow. Today, Dale says they are just shy of 90 pounds of milk per cow, and components per cow per day are between 6 and 6.2.

“We realized that profitability didn’t have as much to do with milk yield per cow as it did with the number of cows, at least in our situation. It took the pressure off chasing milk per cow. It also changed my decision-making. I used to be afraid to do anything with nutrition that might impede their milk production, but I don’t worry about that as much anymore,” he added.

The biggest learning curve has been feeding the herd and managing outliers in the groups. When they first started overcrowding, Dale says they had thin cows and outliers. Once they started over-feeding the cows and feeding the groups about 5-10 pounds of weigh backs, the outliers disappeared. They currently feed the weigh backs to the heifers.

“As far as production per cow, it has only gone up. Reproduction has improved. I don’t know if it’s directly because of overcrowding, but once we became more profitable, we could spend more money on packing silage and on fertilizer for better yields and better quality crops. It seemed to be a domino effect into more successful aspects of our operation,” Dale explained.

Dale says getting all the partners aligned with this practice took some time, especially those who worked most closely with the cows. It reinforced the need to keep their cows comfortable. Their team beds three times a week, grooms the stalls two days a week, and stays on top of grooving on the concrete. They also utilize RFID ear tags to identify and track their livestock inventory as well as record essential health data for each animal.

“There’s still some sensitivity to cow health with overcrowding, but if you look at the gross numbers, I think it works,” he said. “I think the closer the partners were to the cows, it was harder for them to accept. I would be one of those as well, but it was a necessity we needed to try. Joy does the cow-side care and is most in tune with them, so she makes sure we are being careful.”

Through the process of overcrowding, Dale says it has altered their approach to decision-making. They now focus on long-term trends instead of short-term observations.

“When you’re evaluating the herd as you move toward overcrowding, I would be very critical over how you make your decisions. If you seem to be reading more injuries or poor post-fresh performance, just ride it out a couple months and see if it still stays that way. I think you’ll be surprised. [Try not to make] decisions based on short-term observations rather than long-term trends,” he added.

During the podcast interview, Dale also described how valuable outside consultants and perspectives are to their business, including a chief financial advisor, advisory team, accountants, and nutritionists. During their years of low profitability, their team was desperately looking for an outside perspective to help them make changes. Dale reflected on a consultant who challenged their decisions, brought confidence to conversations, encouraged them to consider overcrowding, and empowered them not to react to cow performance and stay the course.

“I value somebody who is outspoken and good at helping us make decisions based on management changes rather than products or spending money. We’ve learned to look for solutions that cost the least and are easy to implement. We think about our history, where we’ve been, and our experience,” Dale shared. “We’ve learned how to measure the consultant’s worth based on what they bring economically, what they cost, how they suit our group and our culture. You have to understand your culture and what drives you.”

To keep a continuous eye on breakeven costs, Dale and the partners are also involved with peer-to-peer benchmarking groups where they compare numbers across 13 herds their size. They analyze and compare operational and financial numbers. The groups sort information by herd and by area of business, including everything from feed costs, labor, milk production and components to somatic cell count, cull rate, metabolic numbers, pregnancy rates and dry matter intakes. Dale says the benchmarking groups can also compare their costs for working with consultants.

“As we’ve gone through our periods of profitability, poor profitability, drought, and herd health issues, you kind of forget what ‘normal’ looks like. But if you’re looking at 13 herds twice a year, you can see the swings and listen to them talk about what they’re going through,” he said. “It really helps you understand that you’re probably normal and it’s not always going to be that way.”

To help other farmers determine if overcrowding is right for them, Dale shared how they figured out the economics and financials for their operation.

“The biggest limitation to your capacity is probably your milking facility and parlor. I’m not sure stalls are necessarily a capacity limiter,” Dale added. “Figure out the concept of a marginal cow and what that means. That will help you make financial decisions much easier, including the increased cost for milking more cows or figuring out if you have the base for milking more cows. It’s a really easy, accurate way to figure out those economics,” Dale added.

To listen to the full podcast interview, visit www.centerfordairyexcellence.org/podcast. The podcast is also available on Spotify, Apple Podcasts, and Amazon Music. With a new episode released each month, Dale’s interview is the second episode in the third season. The podcast was designed to share real-time farmer insight, tricks of the trade, and inspiring stories from dairies across Pennsylvania.