I have heard that we all have our personal journey with mental health as we walk through life’s ups and downs. Westmoreland County Dairy Farmer Chuck Carr shared his journey with mental health and wellness during the February Dairy Summit. Chuck has experienced his share of challenges, including a devastating barn fire in 2007 and a loss of a spouse in 2008. In 2018, though, he suffered his greatest setback when he found himself caught between a gate and an oncoming skidloader. The life-altering accident left him with a traumatic brain injury and a long road ahead to recovery.

That day in September almost three years ago started just like any other day on the farm. They were short on help, and he was milking every shift. He was tired and overworked, simply because there were not enough hours in the day to get everything done. When Chuck saw the skidloader backing toward a closed gate, he knew he didn’t have enough time to fix a mangled gate, so he tried to quickly open it before the skidloader got there. Unfortunately, the skidloader got there first, and the gate smashed Chuck right in the forehead, fracturing his skull in two places.

It’s a situation that is all too familiar on the farm. When I think back on farm injuries I have had, often they occurred when I was rushing to get things done or if I tried to do something by myself instead of asking for help first. Farmers are hardworking and independent. We are supposed to be able to figure it out on our own, and we are not supposed to be vulnerable. But Chuck’s story is really a testament to how vulnerable we all are and how much we do need people around us.

When Chuck woke up in the hospital, he had tremendous vertigo and was suffering from sensitivity to light, noise, and any motion. He saw double for six months, and he needed to learn to walk and remember again. With his loss of hearing, balance and memory, Chuck experienced a deep sense of loss in his dignity and his connectiveness to other people. Before long, he found himself in a deep state of depression. After months of struggling, Chuck was finally pulled back out of it when a friend gave him a set of books from Joni Eareckson Tada that inspired him to find opportunities and move forward. 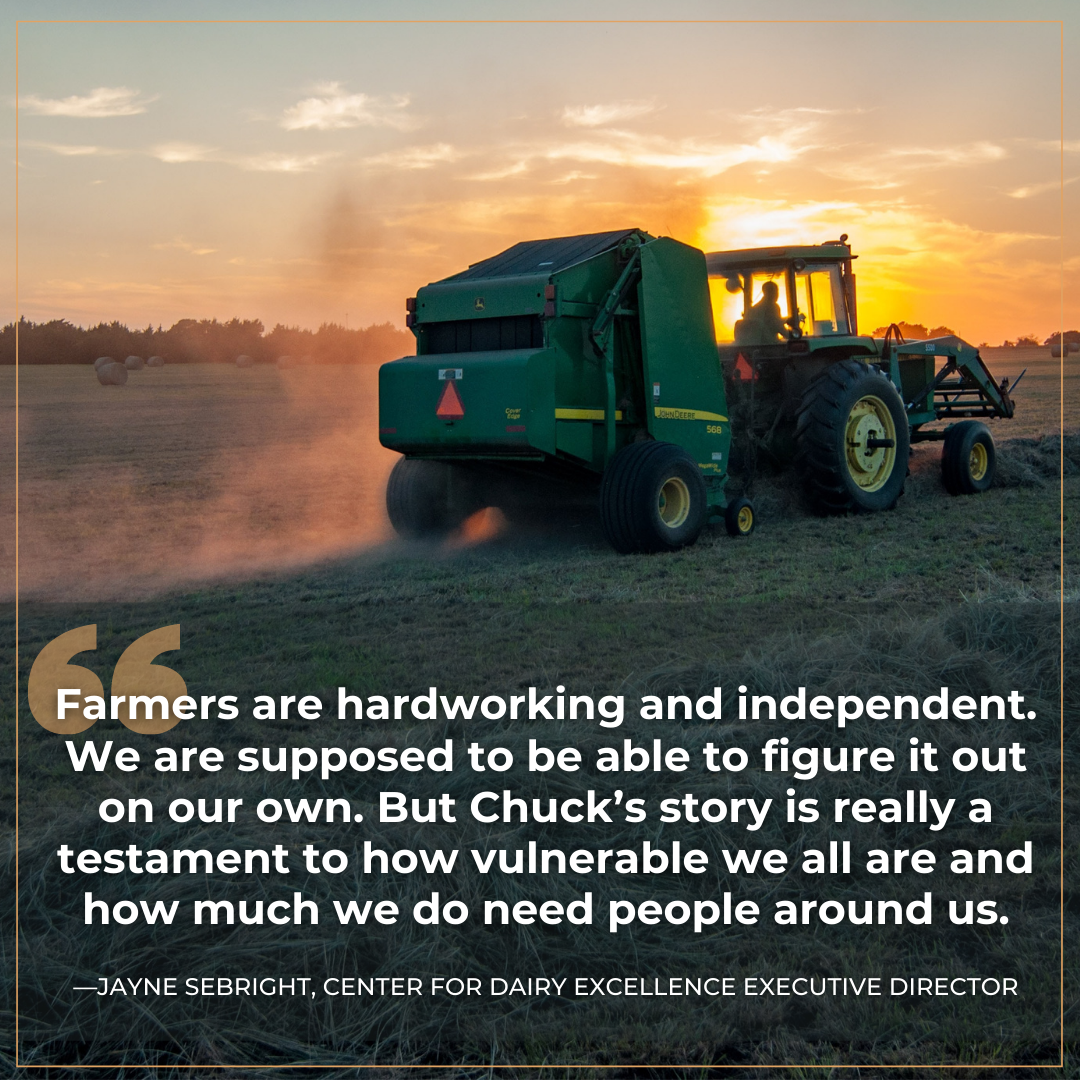 May is National Mental Health Awareness Month. Mental health is not often something farmers want to talk about or are even willing to admit could be a challenge for us. As dairy farmers, we inheritably see ourselves as strong, independent, and able to take whatever life throws at us. But we work in a high-stress, high-risk profession, where anxiety and depression are much more common than most of us are willing to admit.

A study from the Centers for Disease Control and Prevention showed that farmers are more likely to die by suicide than any other occupation. Depression and anxiety often go undiagnosed in the farm community until it is too late. That’s because farmers often view needing help as a sign of weakness, so we internalize the stress until our bodies become like pressure cookers about to explode. The truth is mental wellness is something that inflicts most Americans at some point in our lives, with one in four adults suffering from a diagnoseable mental health disorder in any given year.

Since 2018, Chuck has become an inspiration to many through the books he writes and messages he shares on his blog. In much of his writing, he uses his own life experiences to show others how sufferings can be changed into blessings. Some of the advice he shared at Summit included:

If you would like to learn more about Chuck’s journey, I was fortunate to talk with him for this month’s episode of our Cowside Conversations podcast series. If you have an iPhone, you can listen to the Cowside Conversations podcast episode on your Apple Podcasts app. It is also available on Spotify, Amazon Music, or on the web at www.centerfordairyexcellence.org/podcast/, or listen below:

If you or someone you know is struggling with mental health, the Center has resources available to help you find guidance and support. Visit www.centerfordairyexcellence.org/stress-wellness-resources/ for a list of hotlines, expert-backed articles from psychologists who have experience working with farmers, and a recording of an honest mental health conversation between two dairy farmers. You can reach out to me directly at 717-817-1376 if you want help in finding someone to talk to or resources that can help.