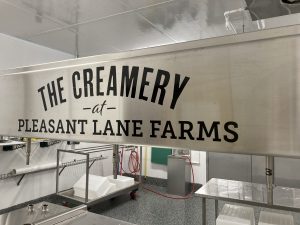 Frye spent years working in the technology space and has experience working for an independent software vendor. When he made the decision to return to the family farm he grew up on, where they milk 40 Holstein cows and farm just under 400 acres, he was able to use his knowledge of business cycles and technology to ask tough questions about the future of the operation.

“There was a point, after I sat on an airplane for 20 hours flying around the world, that I sort of missed the view from the tractor seat, or the farm, so to speak,” Frye shared. “When my [family] and I moved back, we were looking at all the memories and responsibilities of having a farm and then looked at the business and wondered: ‘How do you make a 40 or 50-cow operation work in today’s economy?’”

He worked with his family to start addressing complex questions such as what happens to the farm when his parents want to retire? What would it take to transform the business into something that could support another seven generations? Frye also described how he began analyzing the dairy market and crunching the numbers. He started by having conversations with other people in the industry, including their feed company, accountant, veterinarian, and dairy supplier, and concluded that his family needed to create a business plan.

Frye also realized the value of working with an outside consultant who could help him develop a business plan for entering the value-added and cheese-making space – an opportunity Frye felt had high potential for his family’s farm.

“At that point, we worked with a consultant and leveraged a grant we received through the Center for Dairy Excellence to help us pay for that consulting time. He came in and sat down with us to put together a plan for what a cheese business plan would look like from a creamery point of view,” Frye explained. “We analyzed what the physical plant would need to look like, the cost of the items in the physical plant, the types of products we could produce, and what we should expect for labor costs.”

As they created the business plan, Frye said they designed it with four income streams in mind on the operating side. These income streams include income from cheese sales; fluid milk sales; miscellaneous farm income such as selling sweet corn and cull animals; and an agritourism component.

“We designed the business from the ground up with agritourism in mind. By living and having an operation close to a population center like Pittsburgh, we feel we have the ability to draw people to the farm and make money from that. We believe that will become our second largest income stream as we move forward with the business plan,” Frye said in the podcast.

He also shared how the COVID-19 pandemic accelerated parts of their business plan and how they were able to scale the operation while holding themselves accountable.

“[Last year], we were hitting six-month revenue targets on cheese sales two months into making cheese. And that was because consumers were seeking out local sources for food and lining up at our little farm store to purchase their product,” Frye shared. “The business plan gave us a guide-post to say ‘Look, if we’re achieving this now, we believe we’re going to be okay.’”

As they scaled four to five times faster than they planned, Frye said they had to spend money ahead of what they had written in the business plan. This required looking at the plan and finding ways to adjust in order to bring that income forward.

“Writing out a formal business plan is the only way to hold yourself accountable. It gives you grounding. It’s written. It’s not subject to the history of interpretation. It’s not a conversation you had at 5 a.m. in the barn. A business plan makes it very clear what your plans and goals are,” Frye said. “It doesn’t have to be complex. It can be two to three pages long.  It allows you to benchmark yourself in a very honest fashion. Even when we struggle here — getting ahead of the plan or falling behind on product growth which impacts us later in the year — we have to be able to look at what that means and how it adjusts things moving forward.”

Frye also referenced the opportunities they have pursued with the business plan, including grants from the Commonwealth.

“Having a business plan in place has been huge for us. We were able to rapidly take advantage of opportunities that were presented by the Commonwealth such as the PA Dairy Investment Program. We were able to put together a very well thought out proposal for a grant,” he explained. “A year later, there was another round and we were able to show execution against our plan and have another grant awarded. We could show them very clearly what our plans were.”

The business plan was also valuable when the Frye family formed a partnership with a lender for an expansion.

“When we pulled the trigger on our Phase Two expansion, which was a very large investment in a smart barn and robots, we were able to sit down with our lender and show them our business plan. We showed them the benchmarks, and they said that made their decision on partnering with us as a lender to be very easy,” Frye added.

Frye and his family also work to adopt and embrace technology within their entire operation. He encourages other dairies, no matter the size, to include new technology in their own business plans.

“We know the big dairies have smart barns, technology, and analytics. I think a lot of farmers wonder if they have the resources to do that,” he said. “What I can tell a 40 or 50-cow operation is that the technology is there for you at your scale to invest and use in your business. It should be part of your business plan.”

Frye also encourages dairy farmers to leverage their community and check in with their support chain. Is your feed mill healthy? Is your cooperative healthy, and are they going to be there to buy your product? Do you have a veterinarian who is going to be with you for the long haul? He says these types of questions and conversations can help dairy farmers view their farm as a business and apply the appropriate metrics.

“I think dairy farmers in particular have a very hard time treating their business as a business. We have a habit of it falling as a lifestyle. That’s a good thing, but sometimes we really need to look at it through the lens of some type of metrics,” Frye added.