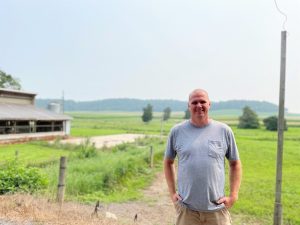 As Donny Bartch of Merrimart Farms in Perry County, Pennsylvania brainstormed ideas for the future of his dairy farm, he thought about a few key questions. How do he and his wife want to end their careers in dairying? If their kids come on board, what kind of opportunities do they want them to have? With the help of a Transformation Team Grant he received through the Center for Dairy Excellence, Donny was able to consider whether transforming the farm with robotic milking technology was a good fit for his future.

“Where we’re at is working fine, but in 10-20 years from now, it won’t be. With the way the dairy industry is going, I think we need to be open-minded to opportunities that are out there,” he shared. “If we don’t want to milk more cows, how can we make more with the cows we have? The Transformation Team grant gave us the opportunity to look at our options and see how well they fit into what we want to do.”

As they considered the robotic milking technology, the grant helped him form a team to perform a feasibility study. Donny worked with Jeff Ainslie of Scotch Hill Solutions and several representatives and accountants from AgChoice Farm Credit to determine his scope for the project and whether it was something he wanted to pursue. He says knowing that the grant funds were being used to invest in the feasibility study, while he could continue putting his cash flow into the dairy operation, gave him peace of mind.

“It took the risk out of the feasibility. There’s such a huge investment to see if it’s even possible before you draw up plans or think about barn design,” Donny said. “For me, being able to work backwards was more helpful than doing all the design work first and talking financials after. I would rather see the scope that we can do and then make our future fit into that scope.”

After working with his Transformation Team and building a plan for the investment, Donny and his family made the decision to move forward with robotics. While he cannot control the weather or milk prices, the plan he developed for the transformation has given him clear parameters for the type of investment they can make.

“We definitely found out where our edge is. I would have hated to start this project and then realized all of a sudden we need to cut out [certain aspects]. Now we know how far we can go and how many extra things we can add to this barn,” Donny shared. “Especially for a farm our size, it’s invaluable just how far the grant money went and the information we were able to get out of it.”

His consultants helped Donny decide how to formulate phases for the transformation. Originally, he was considering a two-phase project where they would start by milking 120 cows with the robots and then move on to the second phase. After researching his options and crunching the numbers, the team determined he could handle 240 cows from the start. It also helped him consider level of production.

“We’re going to continue to milk some in the parlor, so it showed us what level of production we need to be able to do that. It gave us all those pieces of the puzzle before we even started,” he added.

The Transformation Team also helped Donny initiate contacts with different companies as he moves forward with the plan. He hopes to start building the new barn in the spring or summer of 2022.

“It was easy, with their contacts, to know who to talk to. It felt like we had a handle of the numbers and enough knowledge even in that small team to know what it was going to cost. We’re just getting into contacting builders and individual companies,” he shared.

As Donny prepares for the large management shift that comes along with robotic milkers, the feasibility study and planning process he completed through the Transformation Team has given him more certainty moving forward.

“The grant took away so many variables and gave us a concrete idea. It helped jumpstart everything. The grant gave me the confidence I needed to move forward with a project like this. It went from a pipe dream to a reality. We’re going to come out on the other side without that uncertainty,” he said.

Learn more about the Center’s Transformation Team Grants and how they can help your operation.