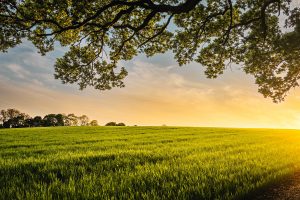 With energy costs often being overlooked on Pennsylvania dairy farms, Josh Waddell of Apple Shamrock Dairy Farm in Crawford County, Pennsylvania shared how an energy audit led to new opportunities and savings on his dairy operation. In the Center for Dairy Excellence’s tenth episode of the “Cow-Side Conversations” podcast, Waddell described his model for success and identified ways his family focuses on efficiency through energy costs, cow comfort, other enterprises, and succession planning. The Waddells milk approximately 1,100 cows, grow their own forages, and have 25 full-time employees.

Waddell opened the podcast by describing multiple expansions they have made over the last 14 years. With several different barns and new buildings on the farm, the lighting they had before the energy audit reflected the transitions his family has made.

“We’re a high input, high output farm. As we’ve continued to expand, we have always been pushing the limit on electricity,” Waddell explained. “We had metal hay lights, fluorescent lights, LED lights – you name it, we had it. The farm has been a slow transition so with each building, you could see the progress of the farm just by looking at the lighting in the barns.”

After completing the energy audit, Waddell learned they could reduce costs simply by changing the lights. With the help of a Pennsylvania Small Business Advantage Grant through the Department of Environmental Protection (DEP), they replaced all the light fixtures on the farm. Not only did they save money with the new lighting, Waddell says they found opportunities to make upgrades and add automation that enhanced efficiency on their dairy.

“After we upgraded our lights, I would say the biggest impact it had on our dairy was the opportunity to add fans and some automation [in places],” he said. “For me as a manager looking at the cow end of things, I knew I was running out of electric. I looked at the energy audit a little different than most. I looked at it as an opportunity to save some amps, add a fan, add an electric motor somewhere, and help make the farm more efficient.”

For the Waddell family, the energy expenses they saved became money they could invest in other areas of the business. By eliminating some of the small, hidden costs that are involved with powering a dairy farm, Waddell says it has led to some significant savings and has helped the farm continue to grow.

“We’re constantly doing projects and [building] something new, so it’s pretty easy to figure out the cost of that project. What you can sometimes miss are the costs of the electric service, the subpanel, the wiring, and all those hidden costs that come with a building,” Waddell shared in the podcast. “By being able to save electricity, we also don’t have the infrastructure cost of setting up another service and upgrading lines. Those things can have significant costs.”

Throughout the podcast, Waddell shared the journey of his farm’s growth and described the small-scale improvements they made that have led to long-term efficiency. He also identified other ways his family prioritizes efficiency on the dairy:

Waddell concluded the podcast by highlighting the importance of community and peer-to-peer advice among dairy producers.

“See if you can find a dairy that’s profitable and you like the way it’s running. Maybe they’ll come in and walk through your facility,” he shared. “I see as much value in a neighbor farmer who’s successful and asking him to come over and share ideas.”

To listen to the full podcast interview, visit www.centerfordairyexcellence.org/podcast. The podcast is also available on Spotify, Apple Podcasts, and Amazon Music. With a new episode released each month, Waddell’s interview is the tenth in the series. The podcast was designed to share real-time farmer insight, tricks of the trade, and inspiring stories from dairies across Pennsylvania.