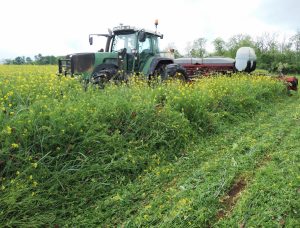 In the Center for Dairy Excellence’s latest episode of the “Cow-Side Conversations” podcast, Ben Peckman from Slate Ridge Dairy in Franklin County, Pennsylvania described several innovative planting and cropping strategies he uses on his operation, including highly diverse cover crop mixes, a green planting approach, a seed-buying group with neighboring farms, and more. With fertilizer costs at an all-time high for dairy producers, Ben discussed how these strategies are helping him boost soil fertility, make the best use of his acreage, and keep costs low each year.

Ben opened the podcast by describing his dairy operation, growing season, and soil type. Slate Ridge Dairy is owned and operated by Ben and his wife, and they milk approximately 150 cows and raise all of their replacement heifers. They have diversified the dairy operation through cash crops, raising and finishing their bull calves, grazing a group of native beef steers on some of their cover crops, and selling grain to local farms and feed mills.

Located in southern Pennsylvania, their growing season typically begins in early March with top-dressing small grains. Ben then begins planting their main crops, including corn and soybean, the last week of April and aims to harvest their corn silage in late August or September. His goal is to finish the fall harvest by Thanksgiving of each year. Weather and soil have an obvious impact on this timeline, and Ben described the soil on his home farm as predominantly shale-based, very shallow, and drought prone. For his other fields that are approximately five miles away, the soil is limestone-based and less drought prone, yet the ground is rockier. With about 1,000 acres, Ben follows a no-till approach with his crops.

“I try to focus on soil health, and no till is just the beginning of that. Keeping the ground covered with a cover crop and keeping those living roots in the soil is important to me. Limiting soil disturbance with no till is also important to protect the soil there,” he shared in the podcast. “I like to have a diverse mix of species in my cover crops and in my general crop rotation. The more diverse the rotation can be, the better the soil health.”

Ben relies on a highly diverse cover cropping mix to help enhance soil health and fertility. He shared his favorite mix of approximately 12-13 species of plants, which includes grasses like rye, triticale, sorghum and oats. He also mixes in several legumes such as crimson, clover, or peas and usually includes radishes or turnips. He also likes to add buckwheat or sunflowers, which flower quickly and attract insects that can help boost soil health.

“I found that if you add legumes in, you can actually grow nitrogen. For a year like this [with high nitrogen prices], that’s huge,” he explained. “But you have to be really flexible and go with what time of year it is, what crop you’re following, and what crop you’re intending to plant the next time. It’s a moving target.”

With his cover crops and no-till program, Ben shared several benefits he has found with a system like this. He says erosion is eliminated, the cover crops provide less weed pressure, the cover crops help keep the soil cooler during hot days, the soil armor protects the fields from heavy wind and rain, and the cover crops store carbon from the atmosphere and protect it in the ground.

“The cover crop will scavenge the nutrients that are applied and hold them there until the next crop needs them. Particularly in the fall, dairies harvest a lot of corn silage. Following the corn silage, you have a good time of year to plant cover crops and they have ample time to grow and flourish before winter comes. To me, dairies and cover crops go hand in hand pretty well,” he added.

With high nitrogen and fertilizer costs across the marketplace, many dairy producers fear that cover crops could take in nitrogen and prevent it from being released into the ground. By getting about half of his nitrogen needs from his manure and soil, and the other half from commercial nitrogen, Ben shared how he navigates the nitrogen tie-up issue.

“It’s a legitimate concern. Anything growing is going to be taking in nitrogen and possibly tying it up.  I feel, though, if your soil is healthy and working properly, any nitrogen that is tied up should be mineralized and released later in the growing season when the crop can use it,” he shared in the podcast. “Having a legume in that cover crop can also offset any nitrogen tie-up because you’re producing nitrogen at the same time it’s growing. That’s why I like mixes.”

Ben also shared how an innovative “green planting” approach is helping with his nitrogen needs and soil health. Instead of killing the cover crop off weeks before planting grain, he keeps the field green throughout the planting process. To avoid competition with emerging corn plants and tall cover that might block the sun from the newly planted crops, he uses a cover crop roller to gently roll the cover crops down to the ground as he plants.

“There are a lot of benefits in my mind to the green planting method. It allows the cover crop to continue to grow and get that root mass there for soil health. In the case of legumes, it allows the legume to produce more nitrogen the longer you let it grow,” Ben explained. “It can present a lot of challenges, though, when you have biomass above the ground to plant through. It needs to be managed somehow. That’s why the cover crop roller was a major breakthrough for me. It’s almost like planting on carpet. It’s really nice.”

In addition to managing high fertilizer costs, Ben shared how a seed-buying group he formed with neighboring farms is helping him manage the rising costs for seed. Even with a variety of hybrids across the group of farms, and several different forms of payment such as cash versus financing, the seed company allows for flexibility.

“Myself and six other neighboring farms are actually pooling our seed order, and there is significant seed cost savings doing it that way. That’s how I’ve been getting around higher seed costs more so than whether it’s traited, conventional or not,” he said. “The company we chose was very flexible. Because we’re committing to well over 1,000 bags of corn, they give us the service of a lower price.”

He also described some other practices he experiments with:

Ben concluded the podcast by sharing advice with other dairy producers leading into the spring planting and harvest season.

“Don’t be afraid to start on a small scale, not only acre wise, but with the number of species in your mix. You probably don’t want to start with 13 species, but I would encourage you to plant more than just rye, for instance,” he added. “In this type of system, one plus one often equals three. Put a rye and a clover out just to get your feet wet with mixing things together and to start to see some those benefits.”

To listen to the full podcast interview, visit www.centerfordairyexcellence.org/podcast. The podcast is also available on Spotify, Apple Podcasts, and Amazon Music. With a new episode released each month, Ben’s interview is the sixth episode in the second season. The podcast was designed to share real-time farmer insight, tricks of the trade, and inspiring stories from dairies across Pennsylvania.