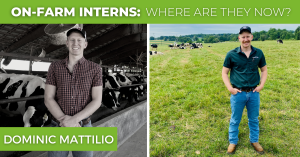 Dominic Mattilio graduated a semester early from Penn State in December 2021 with a degree in animal science and minors in agronomy and business. By the time he crossed the stage, he had accepted a job with Land O’Lakes Inc. as a Dairy Field Representative. This is a job he describes as being the “go-to person” for the producers he works with. From milk and sanitary inspections to generational transfers and paperwork, Dominic is the point person for the 91 dairy farms that he works with in southern Lancaster County.

Before starting his career at Land O’Lakes, Dominic packed his bags and headed to Tauer Dairy in Hanska, Minnesota to complete an on-farm internship during the summer of 2020. In Hanska, Dominic did field work, in addition to milking and cow management. He even got to learn a little more about the business side of farming.

One of the requirements for on-farm interns is completing a research project. Dominic was tasked with the project of looking into a new heifer barn. He spent time researching different housing options and left his ideas behind with his host family in Hanska when he returned to Pennsylvania. A year later, Dominic connected with his host farm to learn that they had started getting estimates and that the project was moving forward.

“I don’t think I had the end goal of the barn, but it was nice because I think my project helped them flesh out some ideas of what they wanted and what they didn’t want,” he said.

While most probably wouldn’t want to stray too far from home for the summer, Dominic was happy to be able to continue learning about dairy farming in a new area. The lessons he learned from Tauer Dairy are lessons he still carries with him in his work today as he connects with producers.

“Anytime you can go to a different dairy operation and work there and pick up things you like and figure out things you don’t like with the operation is very beneficial…It’s nice to be able to bounce ideas off of my producers now from the different dairies I have worked at, and Tauer Dairy was one of those I could really use as a resource for knowledge,” said Dominic.

So, how did Mattilio find himself in his role as a Dairy Field Representative? In addition to his internship experience, it was through the connections he made while attending Penn State. Through two different Penn State connections and an encouraging professor, Dominic heard about the opportunity at Land O’Lakes.

“I wasn’t set on any career path in college. I just knew that whatever I wanted to do I wanted to travel to different farms, be able to talk to producers and see their operations,” he said.

Dominic describes his role with Land O’ Lakes as being able to tour a farm every day, which is something he enjoys. While he didn’t necessarily have a plan in mind of where he wanted to live after graduation, Land O’ Lakes gave him the opportunity to return to his home of Lancaster County. Being able to tell producers that he is just from up the road is an aspect that both he and his producers alike appreciate.

“It is just a great opportunity to be back where I’m from. I work with some producers that I already know from just living in this area,” said Dominic.

Dominic’s advice for students who are preparing to enter the agriculture industry is that internships are important, but so are the experiences students have while attending college — such as being a part of clubs or going to events like service opportunities or banquets.  He recommends the on-farm internship to interested students because it is much more than just being on the farm.

“[The internship is] not just an extra hand around. It’s a learning experience for that intern and I think that’s what really sets these internships apart from just going down and working on a dairy farm,” Dominic added.

The Center for Dairy Excellence Foundation, the Professional Dairy Managers of Pennsylvania, and the Pennsylvania Dairymen’s Association provide $3,000 grants to support the on-farm internship program each summer. Learn more